Lord Kraven has ensnared Zek to serve as one of his protectors in the Kraven Guard by threatening the well-being of his family. But Zell in convinced that, with the support of the New Revolt, their family could leave Lunya and be safe in Arya. She wants nothing more than to see her brother free. Stay tuned for more characters and story elements from the Planet Altarz. In My Head by the Unknown Hero, the music that sets the stage for the Altarian drama, is out now! Buy or stre

Zek’s sister Zell lives on the outskirts of Lunya with her father. While not formally a part of the New Revolt, she occasionally lends her telekinetic powers to their efforts. She is angry with her brother for protecting Lord Kraven, although she knows the Lord is using the safety of their family as leverage against him. Zell thinks that if they banded together with the help of the New Revolt, they could keep each other safe. Stay tuned for more from the planet Altarz. Unknow

Zek is a reluctant member of the Kraven Guard. With his unusual speed, agility, and acute visual perception, he was becoming a rising star in local sparring contests when he was spotted and forcibly enlisted by Kraven’s recruiters. Despite his unfortunate employment, he maintains a sense of play, although he would never smile around the Lord himself. He is a skilled fighter who would rather make friends than enemies. Next up: meet Zek's sister. Pre-order Unknown Hero's album

N'ima, the Communications Officer for the New Revolt, monitors the well being of her team using her particular kind of clairvoyance. She is able to track the precise location of any being she has ever touched and to intuit information about their state of being and immediate surrounds. She has just sensed Amara's surprise encounter with the Unknown Hero (see "First Encounter") and is sending Z'oa to see what's going on. Check back soon to meet more of the characters involved

After Z’oa’s abduction from Alaraan, N’ima was sent to locate and protect her. Her peculiar, mystical skillset made her the perfect choice for this task. With only a few moments of concentration, she can determine the precise location of any living being she has ever touched. After following Z’oa to Altarz, N’ima settled in as her protector. When the New Revolt formed in support of the Unknown Hero, she was the obvious choice for Communications Officer. Stay tuned to watch th

Z’oa was born on Alaraan, a neighboring planet to Altarz. Lord Kraven had her captured as a child and brought to Lunya as a servant. Like all of her people, she has an ethereal voice, a deep and spiritual connection to song, and powers that Lord Kraven and most of the citizens of Lunya do not understand. Unbeknownst to Kraven, she befriended Amara as an adolescent and has recently joined the New Revolt. Stay tuned for more. Next up: another native of Alaraan Pre-order the sou

The relationship between Lord Kraven and the Bounty Hunter is complex. While he has hired her to do his dirty work, her true loyalties remain a mystery. The newly released single Hero Beware (click here) sets the tone. Check back soon to meet more of the characters involved in the drama unfolding on the planet Altarz. Pre-order Unknown Hero's album In My Head, on iTunes here or BandCamp here. 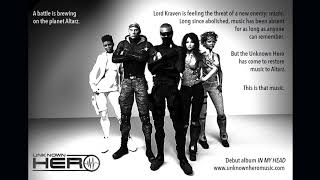